Today is the 50th anniversary of the start of China’s Great Cultural Revolution (文化大革命). May 16th is considered to be the start because on this day began a purge of the Politburo. Instigated by Mao Zedong, it lasted for 10 years (1966-1976) and aimed to destroy the Four Olds (四旧) or perceived enemies of Chinese culture: new customs, new habits, new culture and new thinking. It was not only western, capitalist ideas that were banned – traditional Chinese cultural traditions were also banned, including Chinese opera. The devastation of this art form is poignantly portrayed in the film Farewell My Concubine (霸王别姬), which you can watch, with English subtitles, on YouTube.

The government is not commemorating this date, but it is being freely discussed by the people on social media, and the South China Morning Post has created a special feature on the “Cultural Revolution, 50 years on”.

This is not surprising. Although there has been a revival in Maoist culture in certain parts of China, notably in Luoyang, and a new patriotic girl group called 56 Flowers (五十六朵花) was formed last year, the official reception of this period is far from warm. It was a decade of oppression, and a far cry from the brief period of liberalisation during the Hundred Flowers Campaign (百花运动) in 1956. If you were a class enemy, you would be sent to the countryside, imprisoned, sent to a labour camp, or executed. Ping Fu, now one of Obama’s tech advisors, was among them, and luckily fled China for the USA. Ding Xueliang, Social Science professor at the Hong Kong University of Science and Technology, was a Red Guard who became disillusioned with the movement and was sent to the countryside. The government admitted the tragedy the Cultural Revolution in 1981, namely that it brought to the Chinese nation and people “the most grave calamity and internal turmoil” (严重灾难的内乱), in a Resolution on Certain Questions in the History of Our Party Since the Founding of the People’s Republic of China (关于建国以来党的若干历史问题的决议), the full text of which can be found here. Read it in English here.

So what was it like, to live in the Cultural Revolution? Members of my family either fled down to Hong Kong or were sent to work the fields, and destroyed their family heirlooms to escape confiscation. Those who came down to Hong Kong were lucky enough not to have to flee on foot and cross illegally. In the 1970s and 80s, when those who had made their fortunes in Hong Kong travelled to the mainland on business trips, they stayed in 5-star hotels but still had to exchange their money at the reception for food coupons (粮票) to buy something to eat outside – these were introduced in the 1950s and abolished in the 1990s. To read more about what food shopping would have been like during the Cultural Revolution, visit chinainsight.info. Returning to the culture of this period, if you weren’t a class enemy (阶级敌人),

You would have been chanting: 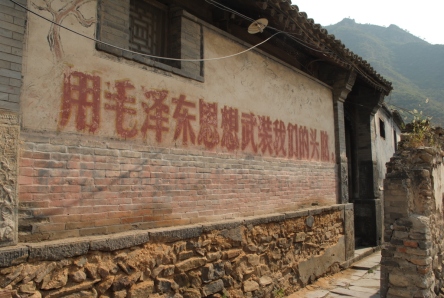 You would have been glorifying: 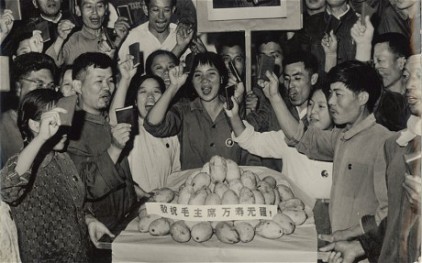 Mangoes – this fruit soared in popularity in northern China after Mao gifted a crate of 40 mangoes to workers in 1968, to thank them for suppressing a student revolt at Qinghua University. For more on the craze for mango memorabilia, read this BBC article. 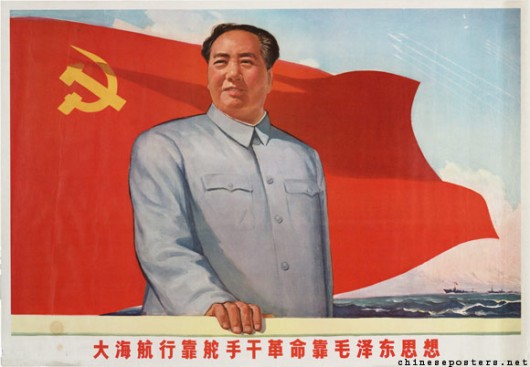 “Sailing the seas depends on the helmsman, waging revolution depends on Mao Zedong Thought”, a poster of helmsman Mao, 1969

Mao Zedong – son of a well-to-do farmer and a founding member of the Communist Party of China (CPC), who founded and led the Red Army (紅軍) to victory in the Civil War and founded the People’s Republic of China (PRC). 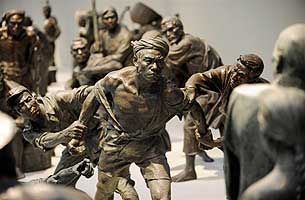 Rent Collection Courtyard (收租院), 114 clay sculptures created by Ye Yushan and his team at Sichuan Academy of Fine Arts in 1965.

Peasants – the irony was, however, that not all peasants were born into a life of manual labour. In the Down to the Countryside Movement (上山下乡运动) 17m young people from privileged urban backgrounds were sent to work the fields. The film Balzac and the Little Chinese Seamstress (巴尔扎克与小裁缝), based on the novel by Dai Sijie, narrates the story of two boys who were sent down. A more recent film, Under the Hawthorn Tree (山楂树之恋), follows a girl who has been sent down, near the end of the Cultural Revolution. The link leads to an unsubtitled film.

You would have been reading: 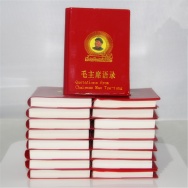 Quotations from Chairman Mao Tse-tung (毛主席语录) – more than 5 billion copies of this “little red book” is said to have been printed in more than 40 different languages, making it the second most printed book after the Bible. Tse-tung is Cantonese pinyin for Zedong. 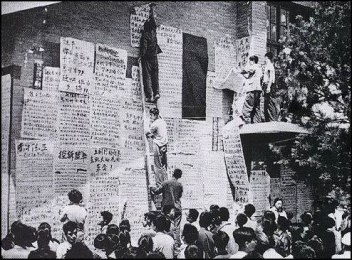 Big-character posters (大字报) – handwritten, wall-mounted posters using large-sized characters. Mao wrote one himself at Beijing University in 1966, entitled “Bombard the Headquarters” (炮打司令部), which was published in the state newspaper the People’s Daily (人民日报) and contributed to the downfall of the then presdient Liu Shaoqi (刘少奇). For more on these posters and changes in calligraphy, read this. 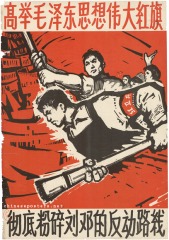 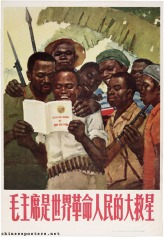 Right: “Chairman Mao is the great liberator of the world’s revolutionary people” (issued 1968)

You would have been singing:

You would have been watching:

The Eight Model Plays (样板戏) – revolutionary operas, ballets, and a cantata which glorified the People’s Liberation Army (PLA) and the bravery of the common people during the struggles of the early 1900s. The most famous was The Legend of the Red Lantern (红灯记).

Valter brani Sarajevo (Walter Defends Sarajevo) – a 1972 film about Yugoslav partisans repelling the Germans from Sarajevo at the end of WWII. It was the best-performing foreign film at the Chinese box office in the 1970s.

You would have been wearing: 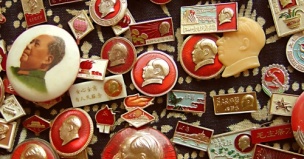 Chairman Mao badges (毛主席像章) – around 5 billion were made between 1966 and 1971, with production slowing down from 1969 when Mao reportedly needed the aluminium for building aeroplanes. 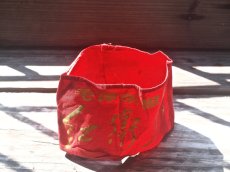 Red Guard armbands if you were a student – they bore the characters for “Red Guards” (红卫兵), a student paramilitary movement that established itself in high schools and universities. Its members denounced any disloyal and anti-communist activities, including that of their own teachers, friends and family, and carried out the punishment for such crimes. To hear accounts from students who have in recent years repented of their actions and apologised to their former teachers, read this Guardian article. 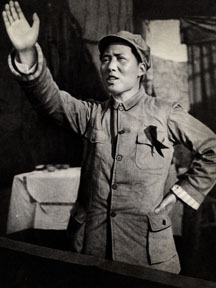 Zhongshan suit (中山裝) if you were male – it was named after the founding father of the Republic of China, Sun Zhongshan (孫中山) who made it popular, and it later became known as the Mao suit. Utilitarian and available in an array of muted colours, of which grey was most common, originally it was meant to set the Republic apart from the excessive Manchu robes of the Qing dynasty. The four pockets on the jacket were said to signify the Four Cardinal Principles in the Chinese philosophical treatise I Ching (周易) or “Book of Changes”: propriety, justice, honesty and a sense of shame. It set Chinese communism apart from Western capitalism, and Western socialists started to wear it too. Under the PRC, the suit was supposed to be “classless” in look, but in reality, the upper class wore suits made of better material and that had more pockets. Nowadays it is less popular in China but is still worn at state functions. In the Western imagination, it signifies evil ambition, and suits in this style are worn by Bond villains. For more information on Communist dress during the Cultural Revolution, visit this Powerhouse Museum webpage. To compare the “Mao suit” with the “Nehru jacket”, visit parisgentleman.co.uk.

3 thoughts on “50 years since the Great Cultural Revolution”